I’ve been working really hard to make the podcast as good as it can possibly be. However, it’s tough balancing work, music, writing a novel and all the other bits and pieces that life throws at you.

With this in mind, I’m only releasing episode 9 next week and then I’m taking a month off to prep the last 4 episodes.

Tuesday 24 – Episode 9, Raspberry Fool – An interview with The Brit

June – episode 10, with the last few episodes coming out weekly after that.

Getting ready to wrap up Ruby’s story is emotional for me, because this project has been in my life for such a long time.

One of the funny things about this podcast, is many people have certain preconceptions simply from hearing the premise and seeing the name: The Sugar Baby Confessionals. At a book launch for a friend of mine, a lady I was chatting to actually recoiled from me physically when I started to tell her about it!

“No,” she said. “That’s not right.” And then she made an excuse and backed away as fast as humanly possible.

So, to say I’ve been bracing myself for complicated responses is an understatement. But I’ve also been overwhelmed by the kind words I’ve received from those who’ve actually listened to it. So many people have been surprised by their own response to it. One friend told me: “I really expected a kind of salacious, titillating romp…and it has those elements, but it’s also really sweet, poignant and funny.”

Yes, I chose the name to incite interest. Sex, as I’m constantly being told, sells, after all. But my hope is that, when people actually listen to it (as almost everyone who has, has told me) all their notions of what to expect will be overturned.

Ruby’s openness has made many people think about their own sex lives. Are they asking for what they want and getting it from their partners? Are they even communicating openly about their needs? I know speaking to her has had a profound effect on me, but it’s been fascinating to hear others talk about how she’s inspired them to try something new in their own relationship.

Next week, the Brit, Ruby’s favourite sugar daddy, gets a chance to tell his side of the story. But will I be able to maintain my journalistic composure?

I guess you’ll just have to listen to find out.

As it’s my birthday today, if you felt like giving me a present, I’d love it if you could review and recommend it to a friend. These podcasts are created by myself, with the help of one or two other people, and we’re still learning this podcraft magic.  I put a ton of love into it, to ensure that I’m doing Ruby’s story justice. I’m not asking for money, but every time you tell someone about the podcast and they download or stream the episode, you take me closer to being able to entice some advertisers into the Fable Gazers fold, and who knows, one day I might be able to work on these stories full time.

Right now, I’m prepping season 2 already and there is so much good stuff, including interviews with Stephen Fry and Joanne Harris.

So, to listen to Season 1 from the beginning go to: 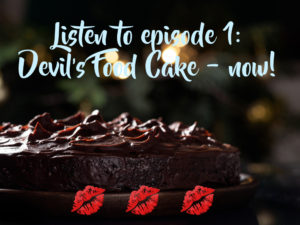 Thanks so much to everyone who’s listened and reviewed so far, you’re amazing!