You know those works of creative genius that simultaneously fill you with hope (because life can’t be that bad if this amazing thing’s been made) and despair (bugger. I’ll never create anything half as good as this)??

If you enjoy the dichotomy of these emotions coursing through your veins – Hadestown by Anais Mitchell is the musical for you.

Being an enormous fangirl for Mitchell’s work, I got up at 6am a few weeks ago to get tickets for the show (playing at the National Theatre). It was the second time for me, first time for Mike, who came along.

Evolving from Mitchell’s eponymous album, I’ve been a fan ever since it came out in 2010. I must have listened to it hundreds of times. Based on the Orpheus myth, it featured Justin Vernon of Bon Ivor and Ani di Franco amongst other great artists.

The music is folk/Americana and the lyrics revisit an old story about love and loss, human frailty and the redemptive power of music.

The genius of Mitchell’s work, (now luxuriantly expanded for the stage with Rachel Chavkin directing), is that it hits so many emotional and thematic resonances for 2018, turning discordant notes (politics, ecological crisis, social inequality) into beautiful song.

So my hopes were very high for this production. People who know me know I have no chill for the things I love anyway, and this album runs deep for me. It’s simply one of the best human creations I’ve ever encountered. (See what I mean? No chill whatsoever.)

So I was in heaven (not hell) when the production exceeded my expectations. The down home choreography (by David Niewmann) is ace, with the loose-limbed cast transporting you to a New Orleans speakeasy, then on to scenes in Hadestown with images of toiling, coal-smudged drudgery, massive torches swinging overhead.

The entire cast is wonderful, so it’s hard to pick anyone out, but Andre De Shields as Hermes, (the louche, dapper MC) was spectacular, holding us in his hand to see this tragedy through to its inevitable end.

Reeve Carney as Orpheus uses his phenomenal vocal range to tackle the challenging songs with the brio of a young Bruce Springsteen. (I also got to see AJ Gillian stepping in for Reeve at the last minute on my second viewing & he crushed it.)

Adorable Eurydice, played by Eva Noblezada had some of the best songs, bringing sweetness and purity to the role – you can well imagine why she catches Hades’ eye.

Hades. Damn. Patrick Page’s deep bass vocal lingers lovingly in the low notes, settling deep into a groove which reverberates somewhere in your stomach: particularly in one of my favourite pieces ‘Hey Little Songbird’.

I loved how Mitchell ties the changing climate to Hades & Persephone’s estrangement – Orpheus needs to write the song which brings them back in tune, repairing man’s relationship to the world in doing so.

Perhaps the most timely and resonant of the songs (written years ago by Mitchell, is she one of the fates?? It wouldn’t surprise me) is ‘Why we build the wall’.

Utterly relevant, this song cleverly exploits ideas so much in our collective unconscious right now – division, paranoia and fear mongering, reminding us that these things have always been with us. ‘& the ones who tell the lies/ are the solemnest to swear’…

My personal heart stopping moment, and the one where the show possibly transcends the album, was the song Orpheus sings to convince the king of hell to free himself and Eurydice – ‘Epic III’.

Watching hard-hearted Hades melt as he remembers ‘Persephone in her mother’s garden/the sun on her shoulders/the wind in her hair…’ – totally exquisite. (I do not use that word lightly… because it is a little bit wanky.)

Most profound: as a creative person, you often feel like you’re toiling away at the coal face of despair, poverty or disinterest.

People tell you your work is pointless, much like the moment when, after everything he’s been through, all the battles he’s fought, doubt creeps in and [SPOILER ALERT] Orpheus looks back.

What Mitchell and the talented group of people (shout out also to orchestrators Michael Chorney and Todd Sickafoose) involved in this production created, is proof that art has a redemptive quality which defies logic, healing us on some deep level (six feet under and more!)

It’s on until early January, see it before it moves to Broadway. The road to hell has never been so glorious. 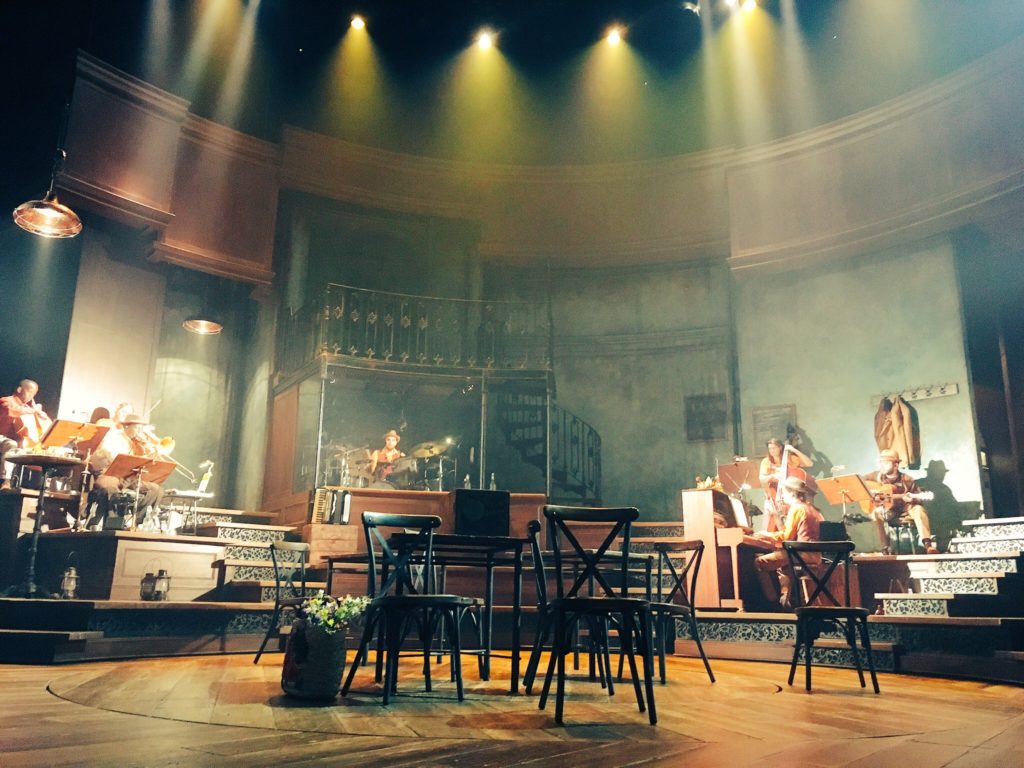