So, a rather bizarre thing happened to me on Thursday evening, which I’ve come to regard as fate teaching me a Lesson in Humility.

I have a pair of (what I thought were) perfectly serviceable platform boots. Worn for years with no problems. Thick, chunky rubber soles, and most crucially… waterproof.
Hadn’t worn them in ages and clawed them out of the back of the cupboard at the last minute.
I was on my way to the bus stop when I noticed A Dampness.

Glanced down and saw a big chunk had fallen off the left boot. Still, I pressed on. (I was very late.)

Welp, by the time I reached Vauxhall they’d literally disintegrated. I shlumped my way disconsolately down the tunnel, and saw I was leaving a snail trail of black bits. The hobos made room for me on their newspaper beds.

So, unless I planned on turning up bare foot, I had no choice but to waddle home.

Of course, that’s when the Victoria line suddenly collapsed. By this point I’d gone down from 5.5m to my usual hobbit height. Literally the descent of man, speeded up for anyone watching.

I’m trying not to make eye contact with other travellers.

By the time I got home, this is what the shoes looked like: 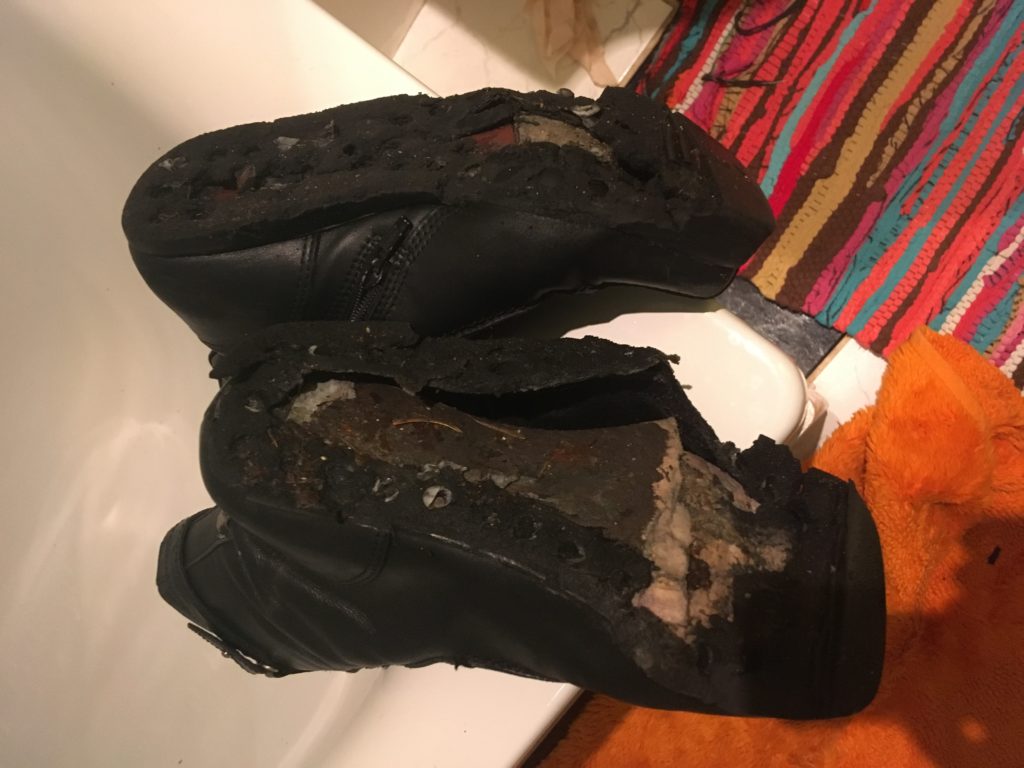 Bottom line? I don’t know if the acid content in London rainwater has gone up or this some weird rubber-related phenomenon, but now I have a cold and a renewed appreciation for people who don’t have access to proper footwear in icy weather. Time to donate to a homeless charity of your choice before winter worsens. What could be a better pressie for some good soul but a donation in their name to Oxfam, The Salvation Army  or Shelter?